Wow, being back from two-weeks of holiday vacation can leave you with a lot to work on. So this week three big topics.

Listservs, jQuery, Putting out a Fire

Three very odd things I ran across this week:

Well, another week is done and all sorts of fun.

So here are three lessons learned this week.

Another week winding down, this time finishing the week in Portland in a meeting with ExLibris and the Alliance. I was invited to attend the meeting on the initiatives by Lori Hildebrandt in charge of Resource Sharing. I currently do not do a lot with Resource Sharing, but I have a lot of knowledge of our history with ExLibris in Resource Sharing. It also worked out very well with my football officiating, as I was assigned a game in Colton which is just south of Portland, so I can easily make it by game time. ExLibris was also willing to at least make a request by us, to look at removing one they had suggested for one we felt was more important.

The second item this week was finishing up installing the ILLiad Primo integration that Lewis & Clark developed. Since I was looking at our ILLiad API last week to try and track down other issues for Liz, I decided to grab the code from Jeremy and update it for our instance of Alma and Illiad. Now in place, it allows users to see their outstanding requests, and to directly see their articles.

Our campus is phasing out all of our Windows 7 machines, and we currently have about 10 still in use. For most of our machines, upgrading to Windows 10 is not going to be an issue, just an issue with reinstalling the software on the systems. So I have begun looking at all of our software on those specific machines, and unfortunately, we have two software packages that only will run on Windows 7. We currently have one machine which is non-networked which may have to be the landing zome for one of these programs which may not require network access to run, but one of the programs definitely is still going to be a hot topic issue come January.

Well, a busy week as I finally got around to doing a couple things I should have done a long time ago. First, we have not had ordered list display properly in libguides since we brought over the campus-style sheets for the look and feel.

What I would run into, when I would display the bullets, is a double bullet in our regular lists, and then in the book lists, you would get a bullet but the object in the list like a book would be pushed to the next line. Finally got the single bullets correct, but the issue with pushing down content in a new div element still existed. 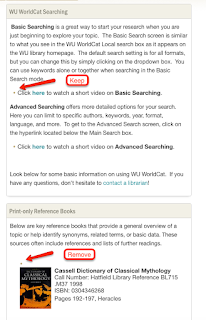 So I needed to isolate the book list ul li combinations, I was able to do that. But once I got that figured out, it turns out there are like three other lists like these ones for web sites, and another for RSS feeds. Hopefully, I'm not missing any other lists. I think I have them all fixed with the following CSS additions.

While working on this issue, I also had a staff member working with ILLiad software to send ILL articles out to other libraries using a tool called Odyssey. What is really weird is that it takes like 2-3 minutes to send the article, when in the past it was pretty much just automatic. Nothing has really changed other than we did have her desktop re-imaged and had to reinstall the software. So it definitely seems like a Windows issue, and we are still working on a solution. One thought I'm going to have her try is to first open the article in Adobe Acrobat, and then have her try and send it.

Finally, I have been going back and forth with Facebook over our app which we use to display our library posts on our main page. So it's really not an app, but just a feature on our website. It's a feature if it was not available would not break our hearts, but well try to jump through their hoops, as they tell us how we can access the posts. The one bright thing from this is I got to learn how to use QuickTime on the mac to create a screencast, it's very straightforward and puts it in a .mov file format so it can be submitted to Facebook. Update our Facebook app which needed manage pages has been approved.
Posted by Bill Kelm at 3:38 PM No comments:

Challenging week, and I'm not sure my fix is in place yet, but it seems like it could be the cause of my current challenge with ILLiad. So are incoming borrowing requests on ILLiad, coming in on Article Exchange were not automatically processing when they came in. So I was thinking all kinds of different things with a recent server move, and after struggling with it for a couple days, I remembered that there are some great logs on the ILLiad server.

I then found this:

So I decided to look for "Found empty or NULL NVTGC value", and was lucky enough to find this document from Atlas on when you have just one ILLiad server to use this on your new user form:

and sure enough it was on my previous form, and I had failed to bring over the customization when we customized the user registration form. There were about 30 people who have registered since we updated the form, and Liz was able to easily identify those folks and update them. So note to self, if you have customized something in the past make sure you carry your customizations forward.

Finally had an Omeka session that seemed to go rather well. I walked the students through the presentation until I got to the actual steps of creating collections, items, and exhibits. I then would just go over each of the slides as I had already demonstrated the steps. I then had handouts for the students to use, and they went about creating their collections, items, and exhibits. Both the instructor and I both agreed Omeka is really something that you just have to use to get the hang of it, and it seemed like a very productive session.